Wessington U3A War Memorials group is engaged in a project to identify all Great War casualties listed on the memorials in Harraton, Washington and Usworth. Over the last three years we have made contacts with local schools, spoken to local groups and mounted four exhibitions – at Arts Centre Washington, Washington Library, Shiney Row Library and Beamish Museum. Exhibitions this year will be at Tourist Information in Albert, Picardy and at Beamish.
Images above of the exhibitions show the tremendous amount of work put in by the group member's.  Here are some of the group in action.  Work includes making poppies and wreathes, cornflowers, cards, bunting, crosses and at the moment our famous 'Poppy Proggy Mat'.   These type of mats are also known as clippy mats, proddy, cleekie, clootie, stubby, poked, tab, broody, bodged and peg rugs.  They were the sort of mats that would be made by families using old woollen clothes.  Ours is an original design to mark The Great War.
We have also placed files of information about those men we have identified (a handful remain a mystery) in local libraries at Washington, Washington Millennium Centre, Durham County Record Office, Tyne and Wear Archives, Newcastle Library, Birtley Library, Gateshead Library, Shiney Row Library, Sunderland City Library and Usworth Holy Trinity Church. 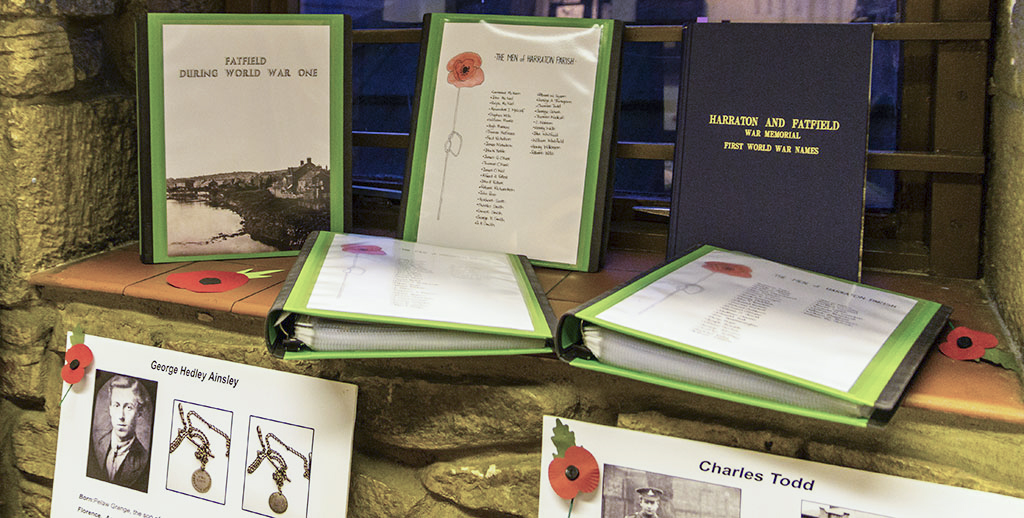 For several years now the group has initiated a gathering at Harraton War Memorial on Armistice Day.  As well as allowing those gathered to participate in an act of remembrance, so the sacrifice of others are never forgotten, it also serve to give a fuller picture to those named on this memorial.  Over the years stories have been recounted on a number of the men named.  It has also been an invaluable time when information from the local community has also been shared with the group.

Over the years the numbers have increased as people are being affected by more recent conflicts.